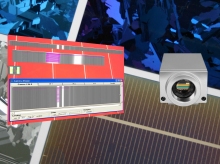 The camera can transmit the analysis data and the scan results to an optional display terminal and a computer in order to immediately show any error sources. Containing the complete analysis electronics, the robust, intelligent camera autonomously carries out all image processing steps. It needs to be connected to a PC only for parameterization. The VC4002L, one of the fastest machine vision systems, has a computing power of 3,200 MIPS. Thus, the performance of its 400 MHz processor from Texas Instruments equals that of a 2.6 GHz Pentium processor. The device supports three integration modes: autonomous operation or external triggering with a constant exposure time or with a triggered exposure. The maximum line frequency is 11 kHz. The sensor scans 2,048 pixels of 7 µm x 7 µm. The camera features 32 MB DRAM and 4 MB Flash EPROM for program and data storage, four digital PLC inputs and outputs each, an image trigger input, and a flash trigger output. Housing dimension of 90 x 50 x 35 mm allow for an easy integration into machines and plants. Like all Smart Cameras from Vision Components, the VC4002L is optimally suited for rugged industrial environments – it contains no moving parts and its robust housing withstands vibrations and shocks. Further examples for successful applications are 2D code recognition as well as width measurement and positioning control of endless materials, including the inspection of cable diameters.