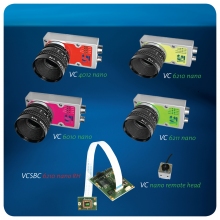 Featuring an extremely stripped-down design, all nano cameras equal the performance of considerably bigger PC systems, and can be used as high-performance vision sensors. Depending on the model, they feature either 300, 400 or 700 MHz DSPs with a maximum computing power of 5,600 MIPS – like all VC cameras, they are therefore capable of independently executing all image processing routines. Images are recorded by means of a global shutter CMOS sensor with a maximum resolution of 5 Megapixels. Up to 128 MB DDRAM and up to 32 MB Flash are available for program and image storage. A freely programmable 100 Mbit Ethernet interface allows for live video output on a PC. Two digital inputs and four outputs are available for integration into existing automation environments.

Vision Components GmbH, founded in 1996 by Michael Engel, inventor of the first intelligent camera for industrial applications, is a leading supplier in the field of machine vision. Branches and distributors represent the Ettlingen-based company worldwide in more than 25 countries. Vision Components develops and distributes intelligent, network-compatible real-time Smart Cameras, which are able to operate without a PC and can be integrated into almost any industrial facility. Typical applications include quality inspection and automation. Equipped with the proprietary multitasking VCRT operating system, VC Smart Cameras can be easily configured for all possible tasks. Furthermore, VC provides software libraries for a wide range of applications including motion capture, decoding, measurement, and positioning. Additionally, VC develops custom-tailored solutions for specific tasks such as wafer handling in the solar industry or OEM camera modules for medical devices technology.